It’s a Sunday afternoon in April. It’s just rained, and we’re sitting at my kitchen table, a plate of homemade Parmesan crisps in front of us. Kate squeezes out toner onto a black tray for my facial. Under her instruction, and equipped with a small mirror, I exfoliate, smooth away dead skin, moisturize, and apply foundation and lipstick.

This isn’t just a makeover, though. Kate and I are discussing my favorite topic: Millennials’ complex roles in the U.S. economy.

A 25-year-old Massachusetts native, Kate graduated in 2012 from Simmons College with a B.S. in Neuroscience. “I was and still am incredibly interested in the brain, its pathways, and its dynamics,” she says. She started out at Roger Williams University but decided to transfer because, Kate says, she felt trapped in an area boasting just a pizza parlor and a few shops.

Boston offered a greater variety of things to do, so Kate returned to her birth city.

Since college graduation, she’s experienced some ups and downs. However, Kate hasn’t let last year’s series of grad school rejections get her down. Instead, she’s taking classes, volunteering, and polishing her applications for a second try.

She does this in addition to working two jobs. At night and on weekends, Kate works as an Independent Beauty Consultant with Mary Kay. By day, she works as a patient service coordinator at Massachusetts General Hospital, answering patient calls, booking appointments, and assisting doctors.

On overcoming her fear of needles:

“I’d convinced myself I couldn’t go into the medical field,” Kate tells me, “because I had a fear of needles. I’d literally faint — no joke! — at the sight of them.”

One day, she asked her father to be a subject. The first two times, she couldn’t find his vein. Swallowing her anxiety, she succeeded.

Today, Kate’s goal is to become a Physician’s Assistant (PA). “I want to be able to spend more time with patients,” she explains, “And doctors tend to be on stricter schedules. As a P.A., though, I’d have the best of both worlds: I’d have the same capabilities as a nurse practitioner but also a real relationship with patients.” 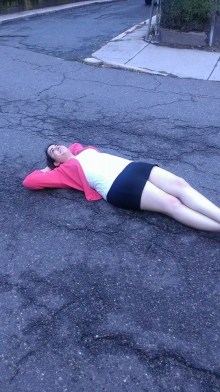 Kate used to be a makeup novice. She didn’t wear makeup except at Thanksgiving and Christmas, and “the first time I put on eyeliner,” she says, “it went horribly.”

After witnessing the success of a friend who works for Mary Kay, though, Kate gave it a try. Since October, she’s spent time pitching products and facilitating makeover parties in clients’ homes.

It’s a handy way to make cash with grad school on the horizon, Kate says. And, now that she has a favorite mascara, the Mary Kay discounts don’t hurt, either!

On making the most of her free time:

Outside of work and school, Kate’s interests run the gamut from Latin dancing to traveling. On weekends, she also finds time to volunteer at Cradles to Crayons in Brighton, MA.

“I wanted to give back to the community,” she explains. So for the past year and a half, she’s been a “volunteer leader,” assigning volunteers roles at the triage station, where clothes are sorted and scrutinized for rips and tears to ensure they meet quality standards.

Kate devotes the rest of her weekends to studying for the GREs, studying biochemistry — the last prerequisite she has to take for PA school — and squeezing in time to see her friends and boyfriend. She’s also just returned from a two-and-a-half-weeks-long trip to Europe, hitting up Italy, the Netherlands, and France!

On conquering the post-grad job market:

As her senior year of college drew to a close, Kate applied to 25 jobs.

Her advice to college grads entering the job market?

She kept an open mind, too, applying for more than one type of position — secretarial and administrative jobs as well as research assistant spots at biotech companies and hospitals.

She got three interviews and, finally, a job offer. “Unlike so many people I know,” Kate says, “I was lucky.”

Reflecting on the myriad ways the Recession impacts Gen Y, she makes an apt comparison: The U.S. economy is like an eye shadow palette.

Landing on her feet in a difficult era, Kate calls herself lucky. Luck’s part of it, maybe. But, after hearing her story, I think the rest may just be hard work, creativity, and determination.