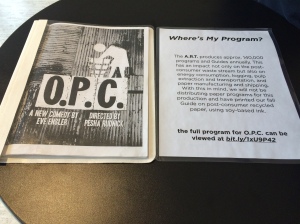 On a wintry Saturday in Cambridge, MA, I joined friends and family at the American Repertory Theater to watch Eve Ensler’s new comedy, “O.P.C.”

Eve Ensler, writer of the well-known “Vagina Monologues,” is no stranger to provocative topics, and “O.P.C.” well suits her brand. The play explores overconsumption: The fact that Americans throw away $165 billion worth of food each year. “O.P.C.” stars a young woman named Romi, a self-described “freegan” who rummages through dumpsters for a living.

Romi’s mother, Smith, running for the Senate and deeply concerned about her image, demands that Romi begin a “normal” life. Visiting Romi in the abandoned apartment where she squats, Smith tells Romi to “get in the game!” To Smith, there is only one game, but Romi isn’t willing to play it.

Adamant about her lifestyle, Romi tells her mother that being a freegan is “about sharing, generosity,” and ending overconsumption, which leads, among other things, to climate change. (Romi’s convictions, though radical, are suggestive of the mainstream sharing economy mentioned in a previous post.) Smith, nearly hysterical, shoots back that real change lies not in digging for trash, but in having a role in government.

The tensions between Romi and Smith call to mind some of the larger questions Gen Y grapples with. What does it mean to live a meaningful life? Does our vote matter? How should we combat the growing threats presented by global warming?

For some, the answer to the last does lie in freeganism. Check out environmentalist Rob Greenfield, who bicycled across the U.S.A., eating mainly out of dumpsters. In New York City, Josh Treuhaft has launched Salvage Supperclub, serving diners “rescued food” inside a well-cleaned dumpster.

Around the country, other millennials are turning to greener pastures — literally — like the couples interviewed in this NPR piece by Jennifer Mitchell. Mitchell writes that her subjects are “part of a generation for whom global warming has been hanging overhead like the sword of Damocles,” which has motivated their lifestyle changes. Could we be Generation Farmer? Time will tell.